I'm sitting in a small floral shop getting ready for the day. I managed to sleep in and get some rest. I actually came here for dinner yesterday evening after wandering around town. There was a bit of a line: around two hours. I asked the woman at the end of the line about the cafe, and she said she would come and visit every time she was in Tokyo.

If it's so good you'll wait in line for two hours to get into a place you frequent, I guess I'll wait, too.

I started the day by going back to Shinjuku and seeing what it was like with more people out. I found a little side-street with a sign pointing inwards: COFFEE. I obliged.

Hiding in a fashionable and bare building was a tiny place. I ordered a matcha latte that was revelatory. While sipping at a swing-out bar-stool, I noticed a stack of booklets tucked neatly into a holder at the table.

It turns out the place Matt and I were going to tomorrow had plenty of little artisans around. I was excited. After polishing off my latte, I headed to the national gardens for tea-time.

I took it slow, looking for the traditional tea house tucked away. I found it sprouting up next to some bushes, almost hidden. I practiced my best polite entry and was greeted by an elderly lady in traditional formalwear. She sat me on a bench along the wall and handed me a tiny, fluffy sweet in the shape of a cloud.

I slowly sipped on my tea, listening to the rain tap on the thin roof. I continued around the park, rain coming and going with no particular direction. I found a cherry tree that had fallen, with a poem written on a sign next to the decaying husk. I crouched down, pulled out my phone, and drew the characters---like I was finger-painting on the screen. I wanted to read the poem.

There was a greenhouse with many micro-climates and a prodigious collection of carnivorous plants.

I still had a few hours before Matt's reservation at the robot restaurant. I passed the time by wandering around shinjuku. I heard a loud chant in the distance. I walked around until I found a procession and caught up with them. I think they were chanting to the new emperor that ascended to the throne today. There were people lining the streets looking at them, many with a look of irritation or bemusement. The procession was quite earnest about whatever they were preaching.

I then made my way to a few to a few shrines in the area. They were completely deserted because of the drizzling rain. One of them had a Buddha holding a staff that looked just like the sculpture in the National Museum of Scotland's statuary. I found that reassuring. 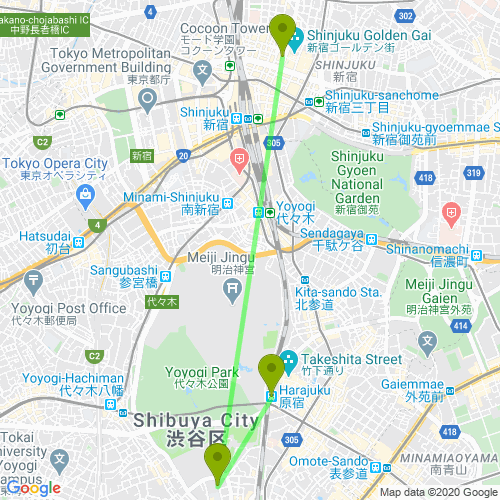