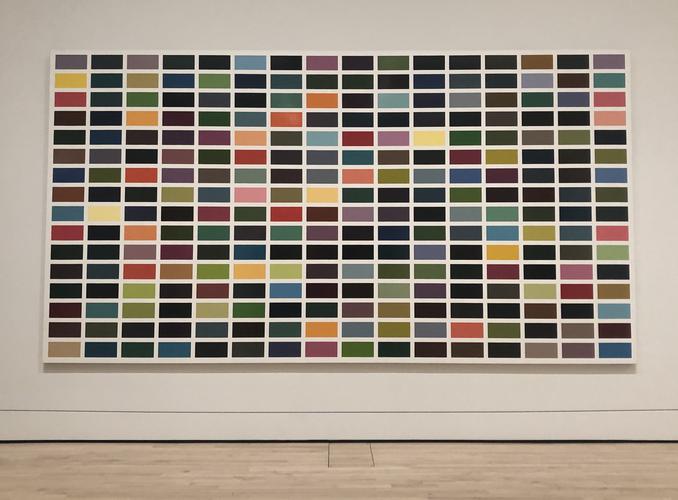 This painting isn’t just colourful: it’s an also an optical illusion. If you stare at it, it looks like there’s grey dots in the intersections.

There is a category which the rough and tumble of life renders most familiarly prominent. We are continually bumping up against hard fact. We expected on thing, or passively took it for granted, and had the image of it in our minds, but experience forces that idea into the background, and compels us to think quite differently. You get this kind of consciousness in some approach to purity when you put your shoulder against a door and try to force it open. You have a sense of resistance and at the same time a sense of effort. There can be no resistance without effort; there can be no effort without resistance. They are only two ways of describing the same experience. It is a double consciousness. We become aware of ourself in becoming aware of the not-self. The waking state is a consciousness of reaction; and as the consciousness itself is two-sided, so it has also two varieties; namely, action, where our modification of other things is more prominent than their reaction on us, and perception, where their effect on us is overwhelmingly greater than our effect on them. And this notion, of being such as other things make us, is such a prominent part of our life that we conceive other things also to exist by virtue of their reactions against each other. The idea of other, of not, becomes a very pivot of thought. To this element I give the name secondness. (CP 1.324)