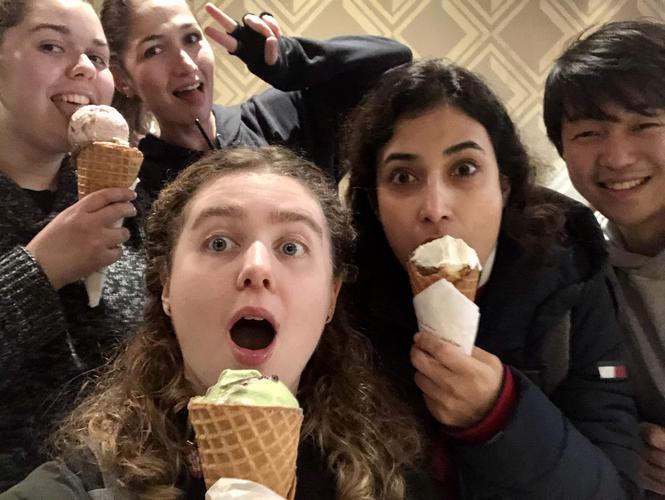 Me and my new twitter friends going for ice cream at Salt & Straw after work.

The ice cream at Salt & Straw is described as some of the best in North America. That may be true, but it still doesn't hold a candle to the perfection of Mary's Milk Bar.

I wander the earth in search for an equally revelatory scoop.

I'm going to go to Homebrew website club next week. 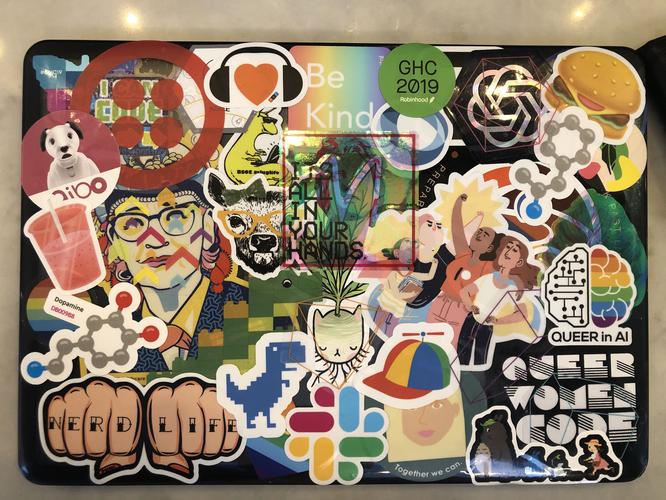 I need to pick a favourite twitter handle for my intern directory page: an unexpectedly overwhelming decision.

Thoughts on what I will and won't do in 2020: reclaiming attention and quality time.

Dylan and I had a really busy end of the year. Between his family's Christmas parties and my family's Cristmas parties, and our friends' Christmas parties there wasn't room to breathe. During the chaotic final weeks of 2019, I noticed something: In spite of the hectic social schedule, I felt way better than most of the preceding year. It had been over a week since I looked at slack, at reddit, or any real idle media. You know, the stuff that fills the gaps in life when you're too tired or too burnt out to do anything else.

I want to keep that feeling going. Here's my analysis of it and plan to keep the party rolling in 2020.

A grad student once told me it was a shame that I spent so much time knitting. The implication being that time knitting is time I could've spent doing research. The joke's on them. The time I spent knitting left me relaxed and ready to do good work while draped in cozy, bespoke knitwear.

I'm not on a quest to become a technological Ubermensch. I'm not trying to optimise my life to make my code that much better. I just want to feel good and do cool things, not chase an impossible ideal.

First, I'm going to be more careful with how I spend my attention.

CGP Grey had a great post on attention where he introduced project cyclops. Grey noticed that he had been fractured by so many attention grabbing things. It culminated in an announcement that he was going to take a hiatus from social media to recalibrate. Grey wanted to be able to focus on meaningful tasks for long periods of time, and felt that activities like listening to podcasts, or cruising social media were training him to not be able to maintain that focus.

Figuring out what's splicing attention resonates with me. I've thought a lot about what's bogarting my time over the past couple of years, and have made some mostly positive changes. Two years ago, I felt that online conversations were pulling me in too many directions. That I wasn't able to get as much done because of online chats. I used to be a regular on a number of IRC channels, and spent too much of my time juggling between various messaging apps. By no means was in the top quartile of messagers, but I found it straining.

I resolved to spend less time jumping between different online chats. If I was in the middle of something, I would finish that up before tabbing over to a conversation. Emotionally, it was an overwhelming relief to trim online conversations back and focus on the people and activities that are physically around me.

Last year I took my instant-messaging hermitude a step further and turned off most of my notifications. It hurts some of my relationships: friends that are far away are sometimes more difficult to keep in touch with, but the laid-back communication style feels more healthy. When I'm talking to my far-away friends, I'm concentrated on them. I don't feel like I'm being pulled apart at the seams as much.

As helpful as this quietude has been, I've found attention is not the whole picture. Even though I've cut out a number of attention-eating activities, I've never recovered the feeling of productivity and ease that I've hoped to.

It's not just about cutting out activities that are productivity-eaters, it's about replacing them with more restorative activities.

Reflecting back on the holiday season, I didn't feel better just because my attention wasn't on reddit, or I wasn't reading twitter: it's also because the activities that were replacing them were better quality---at least to me.

Not all leisure is created equally. It's not just about how an activity fractures attention, but what you get out of an activity. The loss when spending time on social media isn't just a lack of productivity. It is also a loss of time that could have been spent on things that make me feel better.

There's a limited amount of not only time, but also energy you can spend on projects. To use a metaphor: you can only drain a battery so much before you have to charge. During some of the more stressful parts of 2019, the biggest issue was not time-management; the biggest road-block to some of the projects I was working on was simply that I did not have the energy to continue working on them.

Not every activity is equally restorative. For me, reading reddit for half an hour doesn't feel as refreshing as, say, knitting for half an hour. Knitting is a better charger than in the battery-filling game than twitter is. The downside of all of this is, the more I'm spending time taking short breaks, the closer I'm getting burn-out.

Working through lunch and spending little chunks of time throughout the day reading forums is a net-negative. I'm getting closer to burn-out even though I might be spending the same amount of time relaxing.

The chief motivation for these small, useless breaks was to get more done. This is a result of my terrible habit of setting unrealistic expectations for project milestones. I was always crunching to get things done.

In grad-school, you're largely responsible for managing your own progress. From the project timelines, to the actual grunt work, to the administrative overhead. It's just you. You're the PM, the dev, and the administrator.

I was crunching because I was constantly putting the bar too high. The pressure wasn't because rampant procrastination. There were no looming deadlines. I was crunching towards my own self-inflicted nothing.

As a result, I was never really satisfied with progress made. Even when I was making progress, it was less progress than I wanted, so it wasn't good progress.

But What am I Going to Do?

This is a lot of talk about what I'm not going to do 2020. What about the things I am going to do? I feel best when I'm building things. In 2020, I'm going to build more things.

I want to make

Last year I worked on a few physical projects. I knit a number of sweaters and socks. I hauled my camera around with me and snapped some shots I'm proud of. I got back into pottery. I took some classes in new crafts.

Working on all these projects was restorative.

I want to continue this into 2020 and focus on doing more with the skills I have, rather than forcing myself through the pangs of early malformed projects.

I want to code

Last year was a big lull for programming: especially personal projects. There's an oddly strong correlation between how grumpy I am and how long it's been since I've worked on a coding project. The best way out of a funk is more programming.

Unfortunately, I've not had much more work to do on my indieweb blog, and I've haven't had many small one-off projects to work on. A rare exception to this coding drought last year was ParityBot. At the beginning of the year I was asked to come help build a twitter bot that tweets out positive messages when it detects hateful tweets. What separated ParityBot from other projects was that I could hop-in and collaborate for a short period of time, and jump out when I was done. It was focused, and I didn't try to over-architect things.

ParityBot was a small project with a clear, achievable notion of success.

In 2020 I hope to tackle more projects that can be either 1) chunked out into small, satisfying pieces; or, 2) can be done over the course of an afternoon.

I want to write

I wrote a bit more last year about personal events (like travelling) and academic things (like my notes): I took hodge-podge notes and turned them into tiny academic posts. This has been useful for me (it forces me to clarify my notes) and it also has been useful for sharing my literature reviews with other students.

This academic-posting two advantages: 1. It's a good way to solidify thoughts. 2. Writing more is the path to writing better.

This year I hope to be more fastidious in my conversion of my lab-notebook into useful posts.

I accidentally said "arigato gozaimasihta" to a Korean person for taking a photo of me while travelling, and I have never been so shamefully embarrassed in my life.

Misreading some derivations you did months ago and fundamentally questioning whether or not you know what maths is feels like a uniquely grad-school thing.

It’s not inspiring when you’re stuck in an elevator and your compatriots ask if it’s your first time.

I've heard many people say they need deadlines in order to get work done. Sometimes I wonder how much of a deadline's magic is just brutally enforced time-boxing. If your project necessarily has to end in a couple days, you'll allocate your time effectively. Time is scarce; you need to make the most of it! Conversely, long projects with vague deadlines have a habit of expanding to fit the time you give them.

The neighborhood toy store where I grew up is now a vape store.

I guess communities do age with their residents.